HISTORY OF THE BLAA – The tradition of baking of The Waterford Blaa dates back to the arrival of the Huguenots.
At the time and throughout the medieval period Waterford was a powerful trading city, leather, wheat,
flour, butter and other agricultural produce from the area around Waterford were shipped to and from England and the Continent mostly to Spain, France and Italy. In 1685, a large section of French Protestants were exiled to
whatever countries gave them shelter, including England and Ireland. 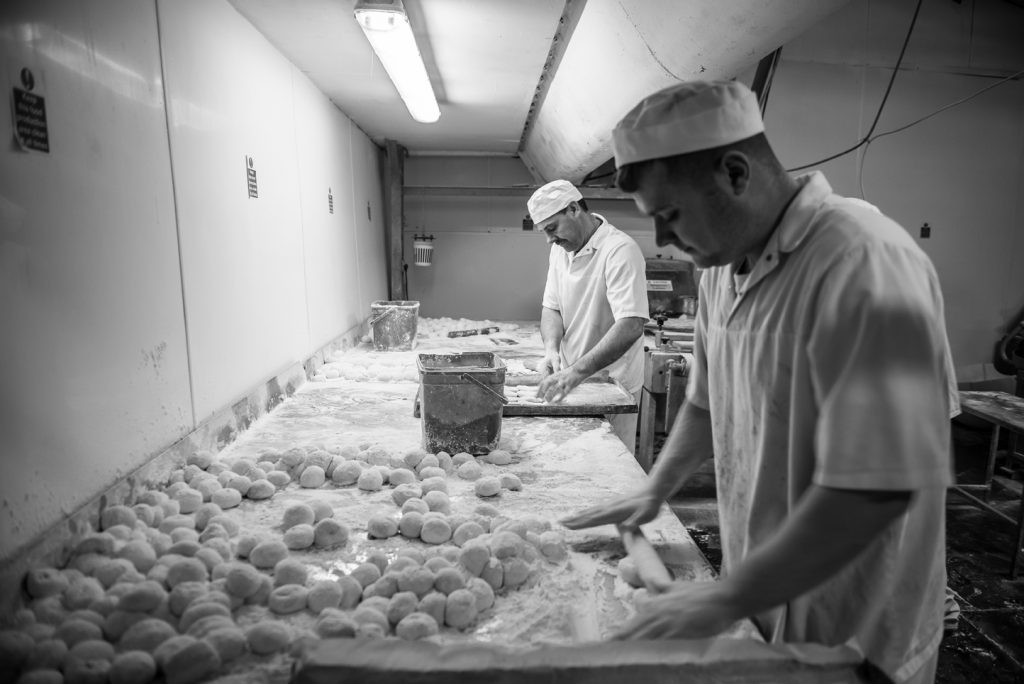 Waterford became a point of attraction to French refugees due to its ease of access; it placed them within
convenient distance of their own shores, should circumstances make their return desirable; and it afforded
a port of trade capable of developing their mercantile abilities.

Unlike other bakery products in this category The Waterford Blaa ontains no enrichment and is made from preservative free strong bakers’ flour, table salt, compressed yeast, dough conditioner and water only.

The addition of flour gives the product the white finish on top which results in the roughs cracked appearance of the Waterford Blaa
which is a characteristic of the product. As Waterford Blaas are not baked with steam the heavy dusting of flour is both for protection from oven heat and to enhance the appearance.

Throughout the production process of the Waterford Blaa there is excessive use of flour, at pining, resting etc. there is also flour on the base of the Blaa. Waterford Blaas are characteristically not uniform in shape and size.

Waterford Blaa is a popular breakfast product usually baked during the night and sold as a bread product normally eaten with just butter or as a mid-day snack to make sandwiches with a variety of everyday fillings including crisps, rashers, red lead, ham, black pudding or steak and relish. Waterford Blaa is best when torn apart by hand and eaten fresh with real butter, straight from the bakery.

The Waterford Blaa Bakers Association was set up in 2009 as a registered partnership when four well known and long established family bakeries from County Waterford and South Kilkenny came together to form the group. The association operates as an official body under the Irish Baker’s and Confectioners Association. The primary objective of the group is to protect the traditional Waterford Blaa as a unique regional Irish food product. The Bakers also co-operate to improve quality and Marketing of Blaa’s in the region and participate in food festivals and food award events.